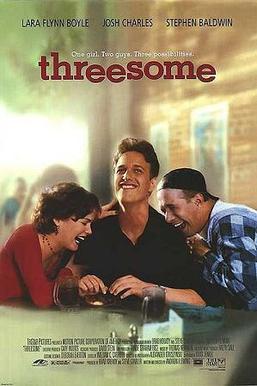 Yes, and no. First of all, the set up. I really do think that after a certain generation, sexual orientation ceases to be a big issue for young people. Gay college students? Yeah, so what, they will say. Someone of that age nowadays will have probably gone through all the emotional journey of being gay. There would be so much support on campus that they would certainly not be as lost as Eddy (Josh Charles) was on this film. This would throw half the premise of the film. But the other half, about the ‘threesome’ is still relevant. How many times have we heard of throuples? The relationship between the three people here seems more for emotional exploratory – it’s how the three of them find a lot about themselves.

Lara Flynn Boyle reads too old to be a college student now, All three leads, in fact, to me, look too old, but then again that ay be my generational bias. Stephen Baldwin here seems a little miscast, but it was nice to see him before he became the right wing Trump supporter that he has become. Charles is best, here, and looks luminously handsome. I remember jonesing over him then, and that angle still works. This is one of those movies that is a product of its time, I think young kids nowadays would probably find the situations laughably hokey, but they have much to learn from how these characters are able to find a bit of themselves from the same situation.