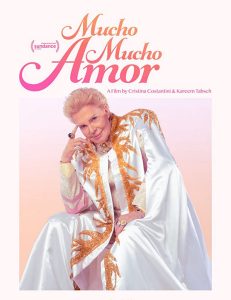 Walter Mercado passed away recently, and I have a lot of Facebook friends who noted and grieved his passing, mentioning how fabulous he was. I honestly wasn’t too familiar with him, though I kind of remember him from my New York years. The Netflix documentary, ‘Mucho Mucho Amor,’ through a lot of archival footage shows what a grand and majestic presence he was on Latin television, as he gives the daily horoscopes clad with capes ornately designed with glitter and Swaroski crystals (Gianni Versace made him one) I have to admit doing the gay gasp seeing some of these costumes, and also wonder how Latinos just embraced him, considering how a lot of men embraced the Macho culture. I guess Walter Mercado was non-binary before anyone knew what that was – he looked kind of like a woman, and not really like a man. It is safe and sexless, though, so in a way it felt ‘safe,’ kind of like the eccentric uncle from that side of your family.

The documentary doesn’t really try to dig deeper, Directors Cristina Constantioni and Kareem Tabsch are obviously enamored by him, so they present him in grand fashion. He sits on his pedestal, and wears his capes as he sits for interview with them. He is given the narrative, as he narrates his life, and the times when he ruled the televisions screen and seen by millions every day. Sure, thats’ nice and all, and essential for viewers like me who did not really know him that well, but I think some depth would have been nice as well. We hear from people around how devastated he was when he was betrayed by his manager Bill Bakula, but he puts a mostly brave face when he discussed it, with his guards up.

Still, you cannot help but be swept by his positive messages. For sure, Walter Mercado is a product of his times, but we all could use some of his magic right now.