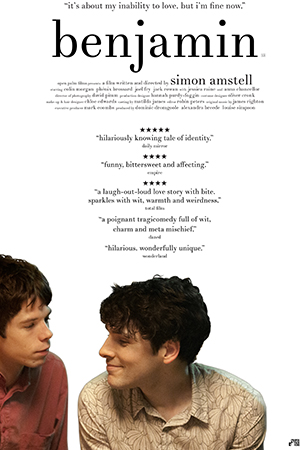 From UK comes ‘Benjamin,’ starring Colin Morgan as the title character. Benjamin is young and nervous. He is a filmmaker who enjoyed success on his first film and is suffering from a (self-inflicted) Sophomore Slump. he is int he middle of releasing his film when he falls in love with a French musician Noah (Phenix Brossard) and he feels his life crumbling – or perhaps finally he is finally in the cusp of, gulp, happiness? Written and Directed by Simon Atwell, this film has all the elements of what I love most: it has a love story, it is intelligently written, it is bittersweet, and it is set in my favorite city London. And it feels like ‘real’ London, with real Londoners. There is a scene here where after Benjamin meets Noah, he becomes a bumbling fool, and I can so relate to that, and I can so relate to Benjamin’s mixture of despair and hope when he feels love. There’s that nagging feeling in you that all this will turn to shit, but of course, there is that hope that this may actually be the one. I loved every minute of this film.

I wish I could say that I enjoyed the neurosis in ‘The Tomorrow Man,’ Noble Jones’ film about senior citizens in love. There’s a lot of tenderness here that I love, and I adore the fact that there is a film that exists where love between two people ‘on the wrong side of sixty’ is explored. But the flaws of the characters, meant to make them more human, kind of scared me. John Lithgow’s Ed seems mostly creepy (he has a garage full of canned food and supplies that is meant to save him from impending doom) though I liked Blythe Danner’s hoarder character of Ronnie a little better, but maybe because for me Danner could do no wrong. I still left the theater in a  more positive note, carrying with me its central love story, and maybe wondering if love could still prevail in spite of all our own (hopefully milder) neurosis. 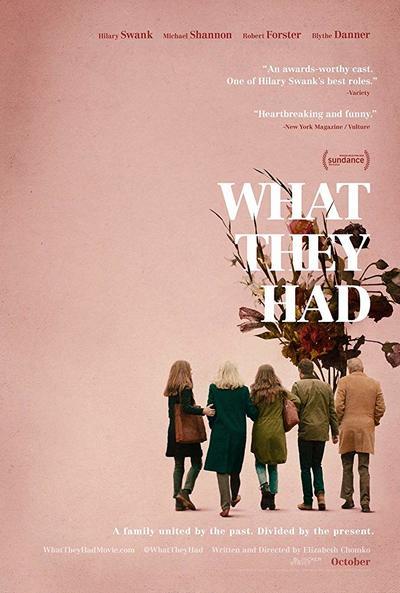 I will see other movies for the rest of the year, and I will get impressed more, awed more, but I don’t think there will be any other film that will touch me more than Elizabeth Chomko’s ‘What We Had.’  I made a lot of sacrifices in my life, and while I do not regret any of my choices, I cannot help but sometimes wonder about ‘what might have been.’ But once in a while, I get a message from the universe that tells me that it doesn’t matter, that we are always exactly where we need to be, and we always end up exactly where we need to end up. This film was one such reminder, and my heart is suddenly overflowing.

The film centers around a family. Ruth’s Alzheimer’s is already progressing, and int he beginning of the film, we see her leaving the house in a snowstorm. This triggers an emergence with her husband Burt (Robert Forster) and their son Nicky (Michael Shannon) who calls his sister Bridget (Hillary Swank) to come help find their mother. She turns out to be fine, this time, but the incident also triggers some lingering questions to be answered. Should they start living in an assisted facility type of domain, as obviously it is getting difficult for them to just be by themselves. Their son is overwhelmed, as he is obviously trying his best to help, being the local one, and he tries to balance this as he runs his own business.

Swank is fantastic. I never really warmed up to her, and at times have exclaimed that she is overrated, but she is great here, balancing the melancholy with humor when needed. You cannot feel but feel for her, and Swank draws you into the emotion. Shannon is drawn less but is even better. You can sense Nicky’s exasperation instantly, and you don’t dislike him even as the character does some self-sabotage. Danner is tenderness and vulnerability and Forster is understandably stubborn. All the actors lend the characters authenticity – you will recognize each and every one of them as people in your own family. When they need to make difficult choices at the end of the film, you cry with them.

And I can certainly identify. This film validates every single feeling I have ever felt when I have been in similar situations – it captures every single one of those emotions perfectly. Maybe some of of you have already felt these things, but if you haven;t, I assure you that you will.