Let’s start the year off with an interesting film, one I had been looking forward to seeing since I saw its trailer months ago: Emerald Fennell’s ‘Promising Young Woman.’ Initially, OI had mistaken that this was going to be a comedy, but from articles I have read since I surmised that it was also some kind of thriller. Carey Mulligan stars as Cassie, a young woman who ‘traps’ men while at the bars, going home with them, and teasing them, and when they act on her come ons, gives them some kind of lesson. She has a notebook with numbers of her conquests – some are labeled in black, others in red (we never really know what this actually means, we guess the red ones are when the encounters turn violent)

It turns out that Cassie is out for revenge. She quit medical school years ago, around the same time when her friend Nina was raped, and we find out that she had such potential – she was doing well, and had to bow out. Cassie is on a revenge rampage, and from these we piece together what happened to her.

There are some loopholes in the story, and the characterizations seem hollow, but Mulligan gets into the role it kind of does not matter – we see her intent anyway. I don’t know if I really agree with some of her later actions – I am usually on the camp where wrongs do not make a right but the story handles that for me later on. I also have reservations about the tome of the film – in the middle of it all there seems to be some kind of romantic comedy thing happening between Cassie meeting Ryan (played by Bo Burnham) and then the the films turns very dark towards the end. But all of this can be overlooked because you will be engrossed by Mulligan, and the film, for the most part. This film will probably cause you to think about boundaries, mental health, and falling in love, and all at the same time. And it has the best use of Rodgers and Hammerstein’s ‘Something Wonderful’ outside of ‘The King & I.’ 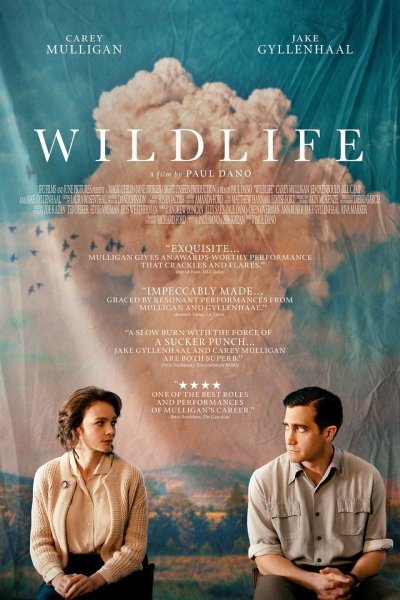 ‘Wild Life’ is one of those movies that are a lot of things, but never feels crowded.  It’s a story about a marriage and its disintegration. It’s a coming-of-age film. It’s a snapshot of life in a particular time (1960) in rural America. It’s all beautifully woven anchored by great performances, directed with grace by Paul Dano, sensitively written by hom and his girlfriend Zoe Kazan.

Jeannette and Jerry Brinson (Carey Mulligan and Jake Gylenhaal) are just like any other American family. They have a fourteen year old son Joe, (Ed Oxenbould) and he plays football. It’s your typical American family, but it’s all for show. Joe isn’t really interested in the sport, and Jerry just lost his job at the golf course because his boss thinks that he’s too friendly with the clientele. When he volunteers to help with fighting the brush fires, Jeanette goes on a transformation. Or is she just finally finding herself? This all happens before Joe’s eyes and he matures before he even realizes it. The film is at times painful to endure, but it’s real. Mulligan moves with ease in showing the change in her character, but I just have this weird thing in me that I see Katie Holms in her – or the other way around perhaps? Gylenhaal gives a solid performance as always, and there is wisdom in Oxnbould’s youth – his is my favorite performance here. This is the kind of film that may seem slight, but as you think about it more, the more you will realize its layers. 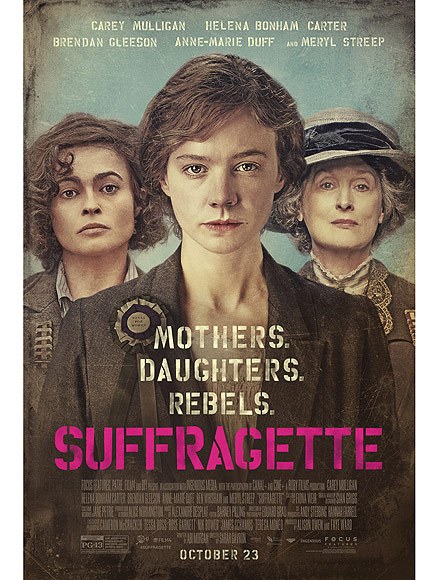 Today millions of people – men and women – marched all over the world to raise awareness for women’s rights, to make sure women are protected, to ensure women are looked at as equals. I stand with my sisters in the world.

And it also is as good time as many to write about ‘Suffragette,” a film I have been meaning to watch for a while now. Today is as good a time as many, and of course the significance of this is even more vital. The film is set in 1918, when women in Britain starting fighting for their right to vole, and had to resort to a lot of civil disobedience to put their points across. It is a powerful message, one that resonates to this day.

I just wished I liked the film more. there are too many things going on, and I foudn myself bored by the main character of Maud. Though played with earnestness by Carey Mulligan,  the character is just one of those dreary ones in drearier situations. (I have to mention the fab Ben Whishaw  who plays her husband – this guy can play anything, and is effective always) Sarah Gavron puts the focus on fictional characters so when Meryl Streep shows up as militant advocate Emmeline Pankhurst, the screen lights up because you are seeing historical figures you have read about, and have some familiarity to. And the ending is bittersweet, with women’s voting rights happening a decade or so after. Still, the message is more important, and we celebrate and protest today.