As a film, Bill Condon’s ‘The Good Liar’ is pretty tepid.  It’s a so-so thriller, a lukewarm comedy, and you just know it’s source material is probably much better than the film. But the film has two great weapons that make it worth your while – Sir Ian McKellen and Helen Mirren. It’s delight to see these two spar against each other, as they make the most mundane watchable. So never mind that there are big holes in the plot, just enjoy the film for the performances.

Kenneth Branagh is obsessed with everything William Shakespeare so it would just make sense that he plays the role of William Shakespeare, and in Ben Elton’s ‘All Is True,’ he plays him pretty convincingly. This film is a re-imagined tale of Shakespeare’s last years and I thought the premise was very interesting. It passed the five minute test for me (meaning it got my attention for the first five minutes of the movie)  However, as the story went on, my interest waned. The performances here are a treat – Judi Dench as Anne Hathaway is mesmerizing – and it’s me, ultimately. I wish I liked it more. 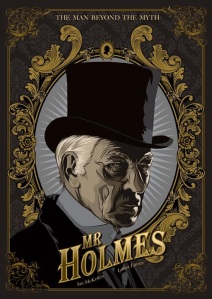 I woke up today with a big dilemma: Sir Ian McKellan or Jake Gylenhaal? I thought, if all else fails, go with the Knight. And I am kind of glad I did, because Sir Ian Mckellan, in “Mr. Holmes” gives one of *those* performances. Seriously, this is how it’s done – the physicality, the voice, every mannerism is perfection. Directed by Bill Condon (they collaborated last in ‘Gods And Monsters’) the film is an adaptation of the 2005 novel by Mitch Cullin, “A Sleight Trick Of The Mind,” where we see a 93 year old Sherlock Holmes, living in Sussex (you can see the white cliffs of Dover vividly) and he is old, melancholy, and a little cranky. His memory is starting to fade, and he has been writing – documenting, as fiction, his last case, an unresolved one featuring a woman who committed suicide. He is also remembering a recent trip to Japan, and of course, still continuing to live, taking are of his bee colonies, and mentoring a young protege. All this makes for a muddled affair, and none of the three competing storylines were compelling enough for me. But, go for the performances. Laura Linney, as his housekeeper, gives an understated performance, and Milo Parker, as his child protegee is cute and precocious. Condon gives this Sherlock cute touches – there is a scene where Holmes goes to a movie adaptation of one of his cases that is hilarious, a meta on meta scenario. I really hope McKelaan gets notices for his performance here – I hope the Miramax machinery makes things happen for him.