I have been resisting ‘Joker’ since it opened. But it’s been tough. I didn’t want to be part of the hype. Look, I have no problem with hypes, but this one rubs me the wrong way. It’s definitely a polarizing film – I have spoken to people lauding it as a masterpiece, and those who dismiss it as utter rubbish. I knew, at some point, I would have to break my rule of not seeing superhero commercial movies (except one starring Tom Holland) so I told myself I might as well go and dig in. Besides, the producers describe this origin story movie as a standalone one and really not connected to the DC Universe.

And guess what? I liked it a lot. It’s not going to be my favorite movie of the year, and surely will not be included in my Top 10, but it entertained me. I thought its production values were excellent, capturing 80s New York City, and setting it to a specific mood. The story had holes, but for the most part I went along for the ride. As for Joaquin Phoenix, I thought he gave it all, but at times  he gave it too much. In general I like subtle performances, but this went all out, all gusto. A lot of times it felt like acting with a capital A, like he is begging for an award. I mean, I probably would be a little upset if he swept the awards season, but I won’t want to die. But let’s talk about the violence? I am a little concerned about how children will perceive it. Over Halloween, there were so many men with joker makeup and masks I fear some misguided kid will imitate this character. I wish the screenplay had a little more back story or motivation for Arthur Fleck, but I guess that is not Todd Phillip’s main concern here. It should be, 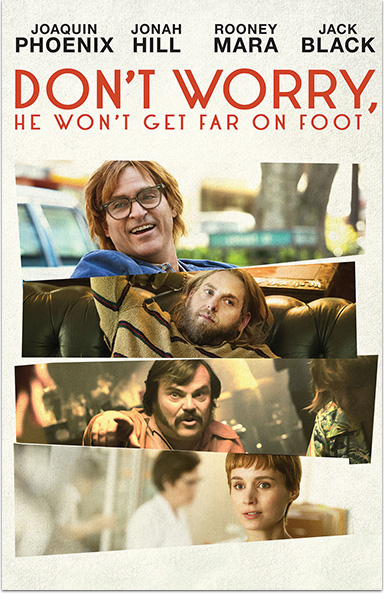 I did not realize that ‘Don’t Worry He Won’t Get Far On Foot’ was directed by Gus Van Sant until the credits/ I have always admired his work as a director, but I have mixed feelings about this film. He wrote the screenplay, which is based on the book by its subject: John Callahan, a cartoonist who is paraplegic. Apparently, Robin Williams, before he passed away, brought the project to Van Sant. I can only imagine what kind of film that collaboration would produce, but I bet it would be better than what we have here. This bio pic focuses more on his alcoholism, and how it was the cause of his vehicular accident that put him on a wheelchair. Plus, we get all the drama about him obsessing that he was given up for adoption by his mother. I was more interested in how he became a famous cartoonist. His work has a flair for the irreverent humor, and it kind of appealed to me, even though I was not really familiar with his work before this. That part of the story is touched upon very briefly here – his relationships take more center stage. Joaquin Phoenix tries his best to form a character here, but isn’t helped much. I only believed him half the time – there’s something off with his performance here. Jonah Hill fares a little better as John’s sponsor – a semi-flamboyant gay trust fund baby. But again, he isn’t much of a character, just decoration for the story. I thought the film felt oddly detached, and I left not knowing much about the main character.

There is no doubt that Lynn Ramsey’s ‘You Were Never Really Here’ is a great film. Based on Jonathan Ames’ novella, the movie screams art, with a very specific dark tone. It brings us to the mind of a killer – but this one is a tormented manic one – he is skillful and is best at what he does, but certainly in his mind he has conflicting emotions – he feels extremely tortured and disturbed by all it. Ramsey’s film deeps deep in his psyche, and we fill it. Joaquin Phoenix is Joe, danger doom and gloom personified here. It is a committed performance, and it is very disturbing to watch and process. This is certainly not a feel-good movie for me – I felt stressed and repulsed by all the goriness on display – this is totally not my genre of choice at all. And while I acknowledge the film’s brilliance, one sitting for this is more than enough for me, as I cannot fathom ever going through the experience again. I see a lot of people commending Phoenix’s performance as one to beat, and I agree – we not only see the physical character here, bu the was also able to convey what is inside the mind of Joe, and very few actors can pull that off. This film is not for me, but I am sure it will be a lot of people’s favorite.