I usually just stay in on New Year’s Eve (I always say it’s Amateur night) but this year I wanted to do something different, and there was Kristen Chenoweth at Disney Hall in DTLA. I thought it would probable be the same as her November Broadway show called ‘For The Girls,’ culled from her new album of the same. Since I missed the Broadway run, I thought this would be just as good.

I was wrong. It really isn’t the same exact show (based on the New York reviews I read) but it’s close. This show is basically a set, which makes sense now since she does an early and a late show – we were at the late show which ends with a countdown to midnight. There are some great elements here – she opens with Peggy Lee’s ‘W O M A N’ with her two fantastic back up singers, Crystal Monee Hall and Marissa Rosen. Indeed, most of the repertoire comes from the new album, and I kind of loved a lot of it, from her wistful ‘The Way We Were,’ ably accompanied by her longtime Musical Director, Mary Mitchell-Campbell. And while there were good versions of ‘You Don’t Own Me,’ and ‘Yesterday Once More,’ the arrangements of those songs did not veer too much from the original versions. The acapella non-amplified version of ‘I Will Always Love You’ was pretty welcome, at least it wasn’t a retread of Whitney Houston’s bombastic version. All in all, it kept me wanting more, though. I wish she had gone through some of her, um, popular songs like, um, ‘Popular.’  But it was still a great way to ring in the New Year. 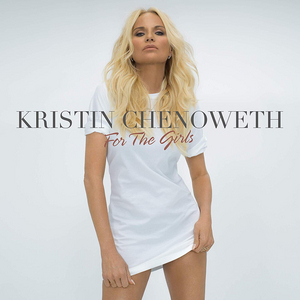 Kristin Chenoweth has a voice that can sing anything. Even though she is known as a soprno, she has a wonderful chest belt, and her lower register is warm and accessible, And of course, she is a great theater singer, who takes excellent care of the written lyric as she expresses the songs’ emotions. In her new album, ‘For The Girls,’ she pays tribute to some of her favorite songs from her favorite female singers. While this is not the most original idea in the world, it feels especially poignant to see this in these #metoo times. Girl Power for the win!

And She starts the album in a bittersweet way, paying tribute to Barbra Streisand via ‘The Way We Were.’ It’s a curious choice, as the choice is very Barbra. Chenoweth doesn’t really tinker much with it, singing it with a spare arrangement but full of varied emotions. It doesn’t sound karaoke at all – it evokes Streisand’s original, but you can tell this is Chenoweth singing from her heart, and it works. My other favorite track is ‘It Doesn’t Matter Anymore,’ which she knows from Eva Cassidy. There’s tenderness and longing on this version, and it will break your heart. There are some star guest appearances here, and some are a little weird – the Peggy Lee ‘I’m a Woman’ track has Jennifer Hudson and Reba McIntyre in it, and it never truly jells. You can tell how she loves doing her duet in ‘I Will Always Love You,’ but it still sounds detached. I suspect that the tracks were recorded separately.  Chenoweth’s versatile voice is the star here, and those accouterments just distract from that. I mean, if she was going to duet with Ariana Grande, I wished they had done an Ariana style song.  Left to her own devices, Chenoweth is at her best. Check out her version of ‘Desperado,’ (From Linda Ronstadt/Eagles) and you can see the way she goes about a song. This is a woman who knows what she is singing about, so best leave her alone.