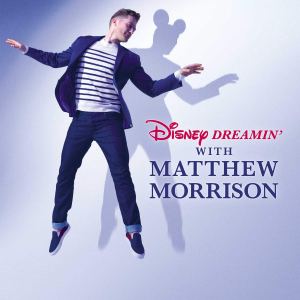 I was sucked into a Hairspray Original Vast YouTube hole over the weekend for some reason, and funny how things change as time passes. I remember not loving the show when it first came out, though I certainly liked the cast, and thought Matthew Morrison was cute and adorable. Watching him sing ‘Without You’ now and I think he does one of the great versions of that song – so many people have done it now and his rendition is still strong in comparison. I always thought Morrison had a handsome voice, and for some reason like it a lot more over the ‘pretty boy’ voices out there. I have enjoyed his solo albums over the years, and I very much enjoyed his new one, ‘Disney Dreamin’ with Matthew Morrison.’

It’s very joyous album. Morrison just recently became a father and this inspired him to do an album of Disney. You can tell he is in ‘happy’ place, and it is infectious. He does very different arrangements of these songs and for the most part, they work. I like his takes on ‘You’ve Got A Friend In Me,’ ‘You’ll Be In My Heart,’ and I love his mash up of ‘Zip A Dee Doo Da/Bare Necessities.’  I like the more ‘character driven songs; and I thought ‘Friend In Me’ was frenetically fun. One misstep, though: his duet with Shoshana Bean doing ‘A Whole New World.’ In theory, the idea of it sounds divine, but the arrangement was off, and I felt a disconnect between them. I felt the same way about Idina Mendel and Ben Platt recently doing the same song – I think its purity is its strongest point – you touch the song too much and it falls apart.

But all in all, this album makes me smile, and nowadays anything that can do that is tops ion my book.