Forgive me for I have sinned.  For not only did I start watching the first three episodes of the new MTV show ‘Lindsay Lohan Beach Club,’ but after watching the first three episodes, I can say that I am totally digging it. And it’s garbage, don’t get me wrong. It’s a low-rent Eurotrash version of Vanderpump Rules, only with a bitchy thirty year old Matriarch here. And this leader is a bitch. Lisa Vanderpump, on her show, at least tries to mentor and hone the skills of the people working for her, but here, Queen Lohan is a bitch in wheels. You know she doesn’t really care what happens to her minions, and all she cares about is her brand, and this show. She has no shame in making it look like she herself is creating the drama.

The cast is your usual blend of trouble makers and ‘attractive’ hot messes. And for sure, the liquor flows freely at their house so they act irrational and combative, when needed to be. These young people talk about goals but what do they really get in something like this? At most, probably the potential of more Instagram followers. I also thought the cast may be a tad too old for the usual MTV brand, but I don;t know if I could speak with any authority on what the MTV brand is nowadays.  And there isn’t much queer content yet – for Mykonos standards – but that seems about to change in future episodes.

But yeah, i think I will be watching this one.

Apparently, this second season of MTV’s ‘Ex On The Beach’ is a who’s who of reality stars. I guess this just goes to show how out of touch I am with reality TV because I really did not know most of the people in the cast. I was lured into the show by Murray Swanby, who was in the E! show ‘What Happens At The Abbey,’ and I only know that show because one of my best friends practically lives at that bar and goes thee multiple times a week. And Murray is cute, so why not? I had never seen an episode of this show, which I gather has been imported from the UK. Basically, a bunch of people live in a house, by the beach so we could see maximum skin, and their exes start to infiltrate the house, and well, drama.

This cast is hot mess personified. They are all reality show staple – troublemakers, pot stirrers, drama queens. It is led by Farrah Abraham, who I know is from Teen Mom (another show I have also never seen) and here we see her as Queen Bee Diva. Everyone else has big personalities, and not even the first day is through that there are already fighting.

I hate them all. But surely, as drama unfolded, I got caught in it. Some exes come in, and romances get rekindled, only to have wrenches thrown in, and well more drama. I don’t really think all is authentic – I bet a lot of the drama is manufactured, or the situations set up for maximum drama.  But yes, a lot of it is pretty engrossing, and I binged the first three episodes with no problem at all. Does that make me shallow? Yes! I am not even calling this a guilty pleasure, it’s just pure television pleasure. I hope it continues that way. 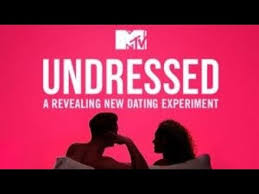 ‘Undressed’ is a ‘new’ series on MTV. At first I thought it was a remake of their own series from the 90s. but this is actually the American version of this franchise, which, I think, comes from Australia. Basically, it’s a reiteration of ‘Love Connection’ where two strangers meet and by 30 seconds they take each other’s clothes so they can interact naked (well, with underwear on) so that take away their inhibitions and be themselves.

It’s a great concept, and this version of the show, because it’s MTV and they want to be ‘edgy.’ is full of diversity. We have two guys who seem to be connecting but then one of them confesses that he voted for Trump, and well can you blame the other guy for giving him a big ‘No’ ? And can you blame him? At the end the Trumpette says ‘I’m starting to regret that,’ and I mutter while watching ‘I hope you learn your lesson.’

There’s a touching pair when a Trans man was paired with a gay men. And while one would think that it would be a mismatch, they had instant chemistry and yesses abound. The trans man thought he would never ever find love again.

It’s nice and cute but honestly I don’t know if I would ever seek this show again.