I don’t know what compelled me to check out David E Kelley’s new show ‘Big Sky.’ I mean, it’s not like I was a fan of his previous shows like L.A. Law or Ally McBeal (I kinda hated that one, actually) Then I realized, yeah probably the allure of Ryan Philippe got me interested. He was promoting the show incessantly and before I knew it, there was the show, on Hulu, calling for me. I just answered the clamor.

What a bore. First of all, Philippe is wasted, with a bland character who probably had ten lines in the first episode, and it even looks like he is killed at the end. I am sure I am not the only one they lost there. The rest of the show is about kidnapping, human trafficking, about spoiled brats who got themselves in troubler because of bad decisions they made. I am out. 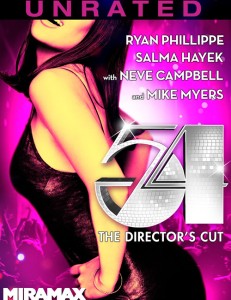 I remember being excited when the film “54” originally came out (in 1998) and now it seems so weird that I remember very little about it. I do remember that the movie released was not the original cut of the director. It turns out 40 minutes of “dark” material was excised from the original version and reportedly Harvey Weinstein wanted to beef up the love angle between Ryan Phillippe and Neve Campbell (who was promoted from a glorified extra to love interest)  So here we are seventeen years later with the Director’s cut of “54,” and while I wouldn’t call it a cinematic masterpiece, this is a more textured movie that is more focused. The heart of “54” now is the love triangle between the characters of Phillippe, Salma Hayek, and Breken Meyer (and the latter looked so handsome in this movie)  There is a clearer characterization of Shane’s sexuality here: it is clear that he swung both ways, and the only ambiguity here is whether he was pairing up for advancement in his career. There has been a lot of talk in that brief kiss between Phillippe and Meyer, and it is a sweet and tender moment, representing the affection the two characters for each other (almost in a non-sexual way, even)  And I know that Mike Myers is still getting accolades for his portrayal of Steve Rubin, but for me he is sort of the weak link: I could never discern if his performance was mimicking or paying tribute. I love the fact that the director Mark Christopher did not treat this as a straightforward morality tale. While Shane, after all he has gone through, did fall down, you just know that he woke up the next day, and persevered. Lastly, if there is one shallow reason to see this movie, it is to celebrate the beauty that is Ryan Phillippe: he is everything in this film – innocent, angelic, sexualized, demonized, menacing, objectified. On that level, it is sheer perfection.