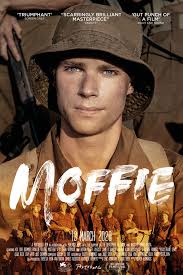 From South Africa comes Olivr Harmanus’ ‘Moffie.’ (the title is a derogatory slang word in Afrikaan for gay) Based on a true story, the film is about a teenager, Nicholas, who gets drafted in 80s South Africa, during the time that the times of Apartheid. Nicholas, played by Kai Luke Brummer, is gay, and he has to hide in the closet as he goes through a brutal training process. And brutal might be an understatement, because they are forced to do inhumane activities to toughen them up for battle. And he has to witness when some other soldiers are busted for homosexual activities. Hermanus films these scenes with deep homoeroticism,  as Nicholas falls for a fellow soldier, Stassewn. But the love story is only used as a backdrop to the story of a young man in battle, not the other way around. I found the film very difficult to watch most of the time, but I felt rewarded by the power of the storytelling.