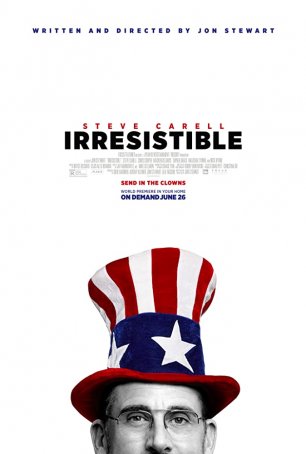 There’s a lot to unpack in Jon Stewart’s ‘Irresistible.’ It’s one of those movies, for me, that start out really well. Steve Carell plays Gary, a Democrat operative and we see him the day after Trump wins. He and his counterpart, Faith, (Rose Byrne) are both spinning their respective messages. And Gary is dejected, not wanting to answer the phone fielding his reaction to the election results. Then Gary zeroes in on a guy (Jack, played by Chris Cooper) from a viral video –  a Democrat in conservative clothing who he deems as some kind of savior for the party. So he goes to Wisconsin to convince Jack to run for mayor. And before you know it, the election cycle goes to high spin, with millions of dollars being thrown in each campaign. The main impression I got from the film? For a comedy it seems to be pretty joyless. The premise is familiar, but the ‘twist’ made it really hard to believe. Yes, it’s a parody, and satire, but the message is packaged differently. It’s a feel-bad movie – it is harsh to both political parties, so I don’t know what audience it is trying to get. Carell and Byrne are good – surprisingly subtle both – but in the end, I lost interest in whatever game they were trying to play.

I just finished the Season finale of ‘The Morning Show,’ and what I ride. I binged the last five episodes, and I am glad I did in one sitting because it was *that* good. This is one of those shows wherein it started quite good, but the episodes kind of ebbed and flowed in the beginning. But as it sprinted towards the end, the story just got juicier, and all sides were presented evenly – and fairly.

And there is a great star in the series, and sorry but it’s neither Jen Aniston or Reese Witherspoon. For me, the MVP of the show is Gugu Mbatha Raw, who plays Hannah. talk about a character arc – she goes from almost-naive to surprised to being caught in the middle of all the crossfires, to being dejected by being used as a pawn. She is fantastic, and is the central heart of the piece.

I also liked that they showed a little bit of Mitch’s side. I don’t mean to exonerate him from his wrong doings, but Carell showed Mitch’s human side of a flawed human being. As for Aniston, I am still conflicted. I do feel another actress could have been better at the role, but don’t ask me who. She is fine, I guess.

I loved how it captured office politics – this happens everywhere not just in the mornign show industry. I look forward to how this all plays out on Season 2.

‘Vice’ had all the elements of a movie I would like – it’s liberal hate bait, it stars Christian Bale, probably the best actor of his generation, and it is directed by Adam McKay, whose previous movie I liked. But ‘Vice’ felt very exhausting for me. It pummels the idea that DIck Cheney is a bad person and is manipulative, and is shrewd. And anyone with any intelligence really knows that – so what. You want to ask, “and then.’ And he does provide the answers – we invade Iraq because of 9/11 when we shouldn’t have – but after a while I just did not want to be in the company of these people. I mean, I can barely stand these people sound-biting on the news, now I will spend two hours with them?  Bale does give a performance of near perfection – he does the Cheney smile/sneer cannily – but that was not enough to keep my interest. And looking back, these issues have been done and dealt with. and we have much bigger problems in politics right now.  I thought it was kind of sweet that Cheney loved his daughter a lot that he was almost for marriage equality. until we get to this calculations in the end while his daughter was campaigning when they just throw their lesbian daughter under the bus. Amy Adams is fine as well as the slimy Lynn Cheney, sure, but still all in all, I just didn’t really like any of these people and I wanted to leave the theater pronto.

After going to a screening of ‘Beautiful Boy,’ a friend texted me wanting to get drinks. I demurred, because the movie made me emotionally exhausted. Director Felix Van Groenigen has adapted David and Nic Sheff’s twin set memoirs of the latter’s battle with addiction and the movie vividly portrays what happens to someone with the disease, and at times it feels like an endless cycle – of vicious highs and lows, of benders and recoveries, and after almost two hours of this, I just felt my heart so heavy. Perhaps it is the ‘caretaker’ in me, a role I have played for most people most of my life – though not lately and not now. There is a part of me that wants to scoop up poor Timothee Chalamet and shake him, or hug him, or both. Chalamet’s portrayal felt at times too real, a testament to how good he is. He literally transforms before our eyes, from a surf-loving teenager to a bonafide methhead. It is one of the most crushing performances I have seen in recent memory, and yes there were tears, and lots.

But I am not blind to the film’s other flaws. The story is mostly told from the father, Davis’s point of view, and in the beginning of the film he asks why could something like this happen to his beautiful boy of a son. We never get an answer to that question. Steve Carrell plays David with a lot of warmth, but also with a touch of indifference. We sense his love for his son, and we get the sacrifices he did for him, but the character is much too heroic, and i never got a sense of its full texture, unlike Chalamet who goes all-out for Nic.

So as a film, we get short strawed, but Chalamet’s performance more than makes up for it. Above everything else, we see a still fearless actor with still no guards whatsoever. I hope he never loses that rawness, as it is what gives him the edge to be one of the finest young actors around.

Why, really, would I be attracted to seeing ‘Last Flag Flying,’ the kind of bruh movie that really does not appeal to any demographic I belong to? Well, because it is directed by Richard Linklater, one of my favorite directors.

In the film, Steve Carrell plays Doc Shepherd, whose son has been killed in Afghanistan. He has to go to bury his son in Arlington Virginia, and enlists his Vietnam War buddies (Bryan Cranston and Larence Fishburn) to help him with that. Of course, there’s clash’s in Cranston’s and Fishburn’s characters, and there are hiccups – they distrust the government so take matters in their own hands and take the body back to New Hampshire to bury the body there.

It’s all standard fare, for me, and the film wisely goes by the actors’ strength, which carry the film. They are all more than fine, in roles these actors can do in their sleep. I frankly got bored, and not because of anyone’s fault, but this kind of movie just did not interest me. 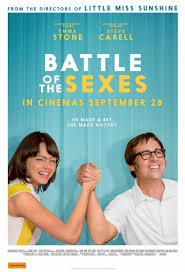 I was six years old when the real ‘Battle of The Sexes’ tennis match happened so I do not have much recollection of it. So I went into this movie not really knowing a lot of the ‘back story’ behind the historic tennis match between Bobby Riggs and Billie Jean King. Directed by Jonathan Dayton and Valerie Faris, ‘Battle Of The Sexes’ is pretty much a straightforward retelling of what happened before the match, with a lot of rom-com thrown in, on Billie’s side anyway.

I did not mind the movie, and have to admit that I was taken along its sweeping journey (I truly did not know who won) and I look at this film kind of like a snapshot of a time. It’s 1973, and women’s rights are just starting to be bandied about, and of course, gay rights are still a lifetime away. I looked at it as an interesting story commenting of how things were back then, more than three decades ago. This has great performances from both Emma Stone and Steve Carrell (playing Billie and Bobby) and you can marvel at both.

I wish it stayed with me, though. I saw it, and I kind of forgot about it right away. While essential, it did seem that the story seem dated, and a lot of what they were fighting for before is no more. But am I just being complacent? Now more than ever, these rights are slowly being taken away by the Trump administration. I just wish the movie inspired me more, it just all seemed so bland and vanilla. 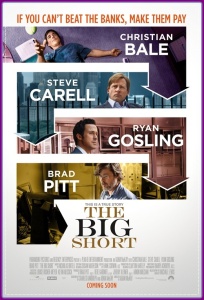 I will always be fascinated with movies about Wall Street because I used to work in the industry (and will probably even go back at some point) and I was excited to hear about “The Big Short,” which is based on Michael Lewis fascinating non-fiction book. Do we need another film about the housing market crash of 2008? There’s the excellent “Margin Call,” which explained Lehman Brother’s collapse, and earlier this year, 99 Homes (my thoughts here,  ) dealt with a more personal look at the homeowners which caused it.

Adam McKay (he directed the Anchorman movies with Will Ferrell) starts off with a comic approach, drawing

characters as almost cartoon-like characters – the metal head broker who wore flip flops, the neurotic New Yorker trader, zany investing BFFs – but, as things get more serious, we see these characters as more humanized versions of themselves. It all works great, thanks to great ensemble-piece acting by Christian Bale, Steve Carrell, and Finn Witrock, among others. I know and recognize these characters, based on my years of working in the industry. I have to make special mention of Brad Pitt, who lost himself in his character that I did not even realize it was him until after a couple of scenes. And I was pleasantly surprised by Ryan Gosling, who is fine here. (I have almost given up on him) 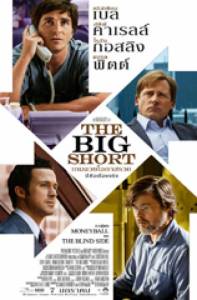 All in all, the film succeeds. It gives us a reason to root for the “good guys” her, though we ask ourselves if we should be rooting for these people who basically bet against the US economy. And it explains how it all happened to most folks who normally who would not take the time to understand how it did, and did it in a very entertaining manner.