I guess I should preface my thoughts on ‘A Rainy Day In New York,’ by commenting on the allegations on Woody Allen, who directed this film.  While all things point to him being a flawed person, his artistry has always impressed me. I remember being young and watching his movies abut Manhattan, and walking those same streets, and thinking, ‘he gets what I want New York to be,’ which is probably what the ideal New York is for hi – classy, filled with interesting off the beaten path places, and soundtracked by songs from the Great American Songbook. Those factors permeate this film, and I am besotted by it. While I wish people would separate artistry from the lives of people, I also understand ‘cancel culture.’ But what can I do, I liked this film.

It probably helps that it stars Timothee Chalamet doing a role that suits him very well – the nebbish New Yorker who finds rainy days romantic, and is comfortable playing the piano at The Carlysle singing ‘Everything Happens To Me,’ I mean, really is there a more ideal version of Chalamet for me? He is great here, essaying a typical Woody Allen hero. IT’s sweet and charming and old fashioned and I am in love with him in it. And I also thought Selena Gomez was fine – sassy and perfect for Chalamet’s Gatsby, and their chemistry was sizzling – Elle Fanning was saddled with the less interesting role, in my opinion. And the great Cherry Jones does a wonderful scene towards the end that is worth any price of admission.

But there are some problems – the set up was a little awkward, and some of the situations forced, but those were easily overshadowed by the performances. And there is still that young woman older man thing that could be troubling, even in the Chalamet/Gomez pairing – his character used to date her character’s older sister.

I think it’s sad that this doesn’t have US distribution (Amazon refuses to release it) because while it’s not nearly the best of Allen’s work, it is fine enough, and it reminds me of a new York I once loved. It doesn’t exist anymore, of course, but once in a while it gets recaptured, and if only for that, I thank Woody Allen. 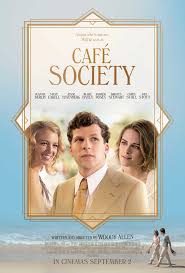 Whatever I feel about Woody Allen’s personal actions, I have always and will be on board regarding his artistry.  I think he is brilliant. I love his films. I love his humour – I get it. I love his writing. There are films of his I don’t like as much, but I still like them and never think they are a waste of my time. His latest film, “Café Society,’ is, in  my opinion, one of his better ones – surprisingly romantic, elegantly written, directed with class.

In its heart, the film is a tragic love story, although you wouldn’t perhaps describe it as such. Jesse Eisenberg plays “Billy” and is the “Woody” character here – the nebby bumbling guy who gets the girls, and he is perfection, probably the best in the line of actors who have tried to Woody it up onscreen. His mannerisms, his tics, his voice – they all mirror the Woody aesthetic. Even Kristen Stewart, as Veronica, convinced me, and trust you me, she had to win me over three thousand times because I have this hatred of Stewart and his perma-scowl. But what do you know, she made me overlook my disdain for her. 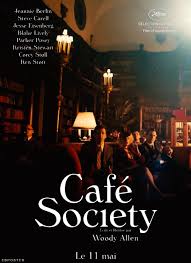 Do I think the movie is perfect? Certainly not. The thin plot gets stretched, with some characters drawings of what Allen has done before – I read a review where the critic pointed out that Bill’s family seems to be the same characters from Allen’s 1987 film ‘Radio Days.’  But I do think that these familiar touches make me appreciate the film more, maybe it makes me feel like I am truly inside Allen’s world. And the costumes and sets are beautiful to look at, transforming you to 1930s Hollywood and New York effortlessly. The ending hits it just right for me – a melancholy, romantic one that will make you pine for the one that got away, if you have ever had one in your life. That alone will get a thumps for me.

Ten seconds into ‘Irrational Man,’  I realized I was about to watch a Woody Allen film when I saw the familiar background, that signature font, and the jazz instrumentals background. Then my heart skipped a bit. For whatever I feel for him as a person, I have always been a fan of Allen’s work. I remember being a young man in Manhattan in the mid 80s binge-watching his earlier movies because I thought it would give me a sense of the true spirit of being in New York City (It did.) Over the years, I won’t dispute the fact that the quality of his movies have ebbed and flowed, but I always say that it is like pizza – even bad ones satisfy. I know a lot of people think ‘Irrational Man’ fall under the bottom Allens, and I kind of disagree it is on the lower end. But I still found a lot to like about it. I liked Joaquin Phoenix’s everyday man performance – he was perfectly cast as the attractive/nebby college Philosophy professor, and I could easily imagine someone

like Emma Srone’s Jill get infatuated with him. But Still gives an unbelievably busy performance. Perhaps sensing how good Phoenix is, she becomes a little too earnest, and delivers a little too much. For a film about a perfect murder, Allen’s screenplay is on the lazy side. But somehow I never expected this film to solely focus on that. I think the film is more about the characters and their eccentricities. I don’t consider this one of Allen’s best, but I was never bored by it.