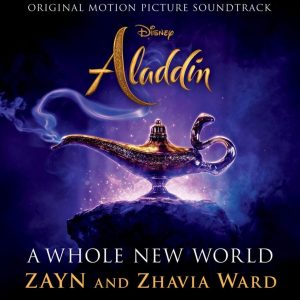 ‘A Whole New World,’ in my opinion, is one of the most beautiful songs in the Disney canon. It certainly is one of my favorites. I am certainly not alone in thinking this, as it is the one and only Disney theme song that has won the Grammy for ‘Song of the Year.’  Moreover, it has the all the elements of what a perfect songs is for a musical.  I always love songs when two people first meet each other, and this song captures that moment precisely, and Tim Rice’s lyrics open up two fold: on one end, it’s a literal (magic carpet) ride akin to a lovers’ ‘first date,’ but at the same time it is also a metaphor to a start of a relationship: it’s a whole new world, we are falling in love. Lea Salonga and Brad Kane sing the song flawlessly, perfectly expressing the exhilaration, the anticipation, the promise of a first romance. I don’t think I am wrong if I declare their version will be listened to long after I am gone. And while the original ‘pop’ version is a lesser, Regina Belle and Peabo Bryson both were able to capture in their own way the essence of a song.

Cut to 2019, and we are about to get a new ‘live action’ version of the movie, directed by Guy Ritchie. I will reserve judgement on the film till I see it, but everything I have seen and heard about it points to an (artistic) failure. And then we get this: the new ‘pop’version of this song, played at the end credits, and sung by Zayn Malik and Zhavia Ward (the old fogey me says ‘who?’ regarding the latter)  Malik is completely wrong for the song – his ’emo’ sensibility is the opposite of what the song needs. He sounds sad, moping, detached.  He mumbles half of Tim Rice’s lyrics, and when Ward comes in, you barely notice in the difference in their voices – I had to listen in to make sure another person was dueting with him.  They have zilch chemistry, and I feel like she was only chosen because their names start with the same letter. And never mind lyric interpretation and sense of character – never for one minute did I sense that the song is about two characters about to fall in love. They sound like they are singing about cat food.

So, no. As afar as I am concerned, this version is an affront to the song’s legacy. No thank you, please.