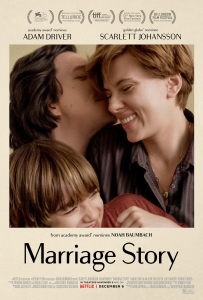 Noah Baumbach’s ‘Marriage Story’ is a love story. But it is framed from an opposite point of view, as the film starts with the couple, played by Adam Driver and Scarlet Johansson, at the office of a therapist who is counseling them about their uncoupling. What follows next is a film about two people trying to figure out themselves as they go through the process of a divorce, and along the way they find that above all things, they still have an evolving feeling of love for each other.

Written by Noah Baumbach (and apparently based on his experience when he was divorcing actress Jennifer Jason Leigh) the film is sometimes difficult to watch. There are a lot factors here that complicate more than just a separation – there is a distance issue as Johansson’s character Nicole moves to Los Angeles after being cast on a pilot (‘But we are a New York Family,’ Driver’s Charlie says)  And when lawyers got involved in the process, the whole situation turned all shades of ugly, and you can see in the character’s faces that even they themselves do not comprehend what exactly has gone on. The premise may be on the familiar side, but the story is elevated by raw and honest career-best performances from both Driver and Johansson. In my review of ‘Jojo Rabbit,’ I wrote that the latter’s earlier performances have previously left me cold, but here she is as real as it gets. And Driver’s brilliance shouldn’t be a revelation, but there is a scene here where he just slays me – in the middle of a fight, Charlie just breaks down and he – both of them – will break your heart. Every year, I pick my ‘sentimental’ favorite performance, and this year his will be hard to top. And there’s even a cherry on top – one of his memorable scenes is when he sings ‘Being Alive’ from Company. When I first read about this, I had reservation, but it was handled so organically that not only did it make perfect sense, but I would even say that this one of the best uses of a Sondheim song out of a show tune’s context. All in all, though, I am not one hundred percent convinced yet that this will be the film I champion come awards season – it comes off as much too white and straight at times, but there’s no denying this will be on my Top 5 films of the year.