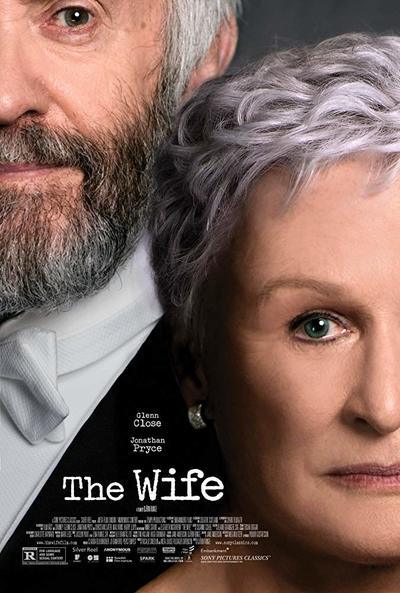 After watching ‘The Wife,’ I will now be officially rooting for Glenn Close to win a Best Actress Oscar. She has been nominated six times and has never won, and if the Academy wants to give statues for ‘body of work,’ then by all means just hand the trophy to her. And it’s not like they would be giving it for a slouchy performance. Her titular role in this film is the heart and soul of the piece – it ties it all together, and it’s a great piece of restrained acting. In the hands of another actress, it could have gone hysterical, or showy, but Close knows how to show restraint, and it all adds up to a weighty and credible performance, and surely worthy of awards and accolades.

I also really liked the film. Swedish Director Bjorn Runge has fashioned an intelligent film, about an author (Jonathan Pryce, also fantastic by the way) who wins the Nobel Prize for Literature. His wife has always been there by his side, and in the course of the film, we also learn that she has profound contribution to his achievements. You get swept into the story right away (with some parts told in flashback) and you get immersed in the low key if a little predictable. suspense of the narrative. Runge’s direction is also on the predictable – if solid – side. I hope the film finds an audience, even in the late summer doldrums.