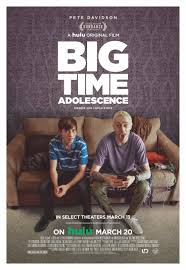 Jeffrey Orley’s ‘Big Time Adolescence’ was kind of a big deal at last year’s Sundance and the film is finally making its way to audiences via Hulu. Pete Davidson got good notices for his performance here as Zeke, a man-child who hasn’t grown up. Gideom Gluck plays Monroe, a sixteen year old who is Zeke’s best friend (Zeke used to date Mo’s older sister) Their friendship is of the odd-couple variety – people around them wonder why they hang out – for Zeke, it’s a chance to relive his High School glory days and for Mo, it’s the ‘coo factor.’ Orley was Nancy Meyer’s assistant so I was hoping we would get a lot of heart in the film, but alas, there were only a few scenes that show tenderness. We have all seen this story before, and probably better. Gluck and Davidson are both fine, but nothing truly great.. It’s interesting to see Jon Cryer as Mo’s father when during his (and mine) time, he would have probably played his son’s role. The film held such promise, but it’s basically a big time bore – or maybe this is just not my kind of film.