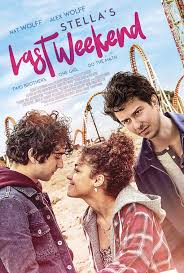 I used to watch the television show ‘Thirtysomething’ back in the day and who knew that a lot of people from its original cast went into directing? I know Ken Olin has done a lot of directing work but I just recently stumbled upon two films directed by other cast members of that show.

Polly Draper directed ‘Stella’s Last Weekend’  which stars her sons Nat and Alex Wolff. these boys are apparently huge Disney Channel stars (another thing I didn’t know) and you know what, this is really a fine film. These brothers are very good actors, and they turned a familiar story into something quite heartfelt – their performances soar here. Int he film, they also play brothers who fall in love with the same girl. Of course, this complications sets up a number of confrontations but they were able to also show how these characters really care for each other. Draper’s direction here shows a firm but delicate hand, and I will not confirm or deny that I shed a tear or two while watching the film (Oh, who am I kidding? Those who know me knows I cry at a drop of a hankie)

Melanie Mayron directed ‘Snapshots’ and though it is not as good as Draper’s film, it is also worth noting. It stars three generation of women – Brooke Adams, Emily Baldoni and a luminescent Piper Laurie – who come together to remember and move forward at a vacation home by the water. Laurie is the star here, evoking melancholy wistfulness of a lost love affair. The story has some holes, but it is nice to see these actors interacting with one another as you can sense a great deal of familiarity and affection that is quite genuine.  I wouldn’t sleep on this one either.