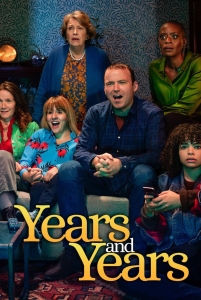 I have been meaning to watch ‘Years and Years’ for a while now, even before it aired on HBO. Firstly because of Russell Tovey, and second because its creator, Rusell T Davies, also did ‘Queer As Folk’ years ago, so I thought this would have substantial queer content (it has) But then I read this article from The Guardian warning me that this is the worst time to start watching the series. When this global pandemic started, I had seen numerous people saying that what we are experiencing now was covered in this show, so I was more than curious to start watching.

So the verdict? Well, don’t follow The Guardian. The series is not scary in a horror kind of way, but it will suck you in and make you think about what is happening in the world. It is also an addictive soapy series, and once you start watching, you will be hooked. It is about the Lyons family, and while the series starts in 2019, it goes up to 2032 and we see what happens to the world along those years (and years)  Russell Tovey indeed is a charmer here, as the gay brother, and I admit I was drawn to his storyline the most. We see him at the beginning of the series married, but falls in love with an illegal alien from Eastern Europe, and we see them get together, be taken apart because of British Immigration laws, and then we see him try to get Viktor back tot he UK, with disastrous results (I dare you not to cry at their fate)

But Emma Thompson steals the series from everyone, playing Vivienne Rook, a politician quite unlike a figure we all can recognize: an oily snake salesman who promises everything but is only out for herself. The series lights up whenever she is on, and if there is a God she should win everything for the series.

Does it make the future scary? Perhaps it does, but you can see that while the world spins to a lot of change, it also spins to make everything go back, as is what is happening right now.  We just need to embrace and adapt.

2 thoughts on “I Believe The Future (Television Thoughts: Years and Years, BBC One/HBO)”