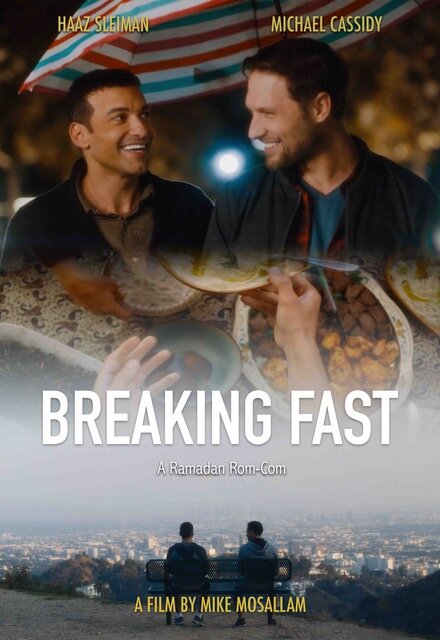 It seems like a convergence of two dissecting worlds – a gay Muslim-American living in West Hollywood? I am sure they exist, and is now the subject of Mike Mossalam’s film ‘Breaking Fast.’  Can you be gay and still be a practicing Muslim? The film posits the question and shows us Mo, a gay doctor who lives in the gay community of West Hollywood. When the film begins, we see him breaking up with his boyfriend because of religious reasons – the boyfriend wants to marry a woman as a beard.  But then he meets Kal, an All-American guy and sparks are instant – but this is dubbed a ‘Ramadan Rom Com’ so we see them meet cute and break cute.

I think this is quite a charming film, an unexpected pleasure. It tackles how a dry religious gay guy can live in modern gay world, with all the extraneous trappings. But it explains the concept well, via a musical. Indeed, in ‘The Sound of Music.’ when Maria goes back to the abbey after realizing she has fallen for the Captain, she is told, ‘Just because you love another man doesn’t mean you love God less.’ The movie is filled with delightful little references like this, without making the subject matter feel too light. Haaz Sleiman plays Mo, and he is great, and matched well by Michael Cassidy’s Kal. I really enjoyed much about the film, and appreciate the authentic feel, from the food to the Weho locale. It is also nice to see a film centered around a non-white, kind of middle-aged protagonist – not everyone in the gay community looks like Matt Bomer, after all.