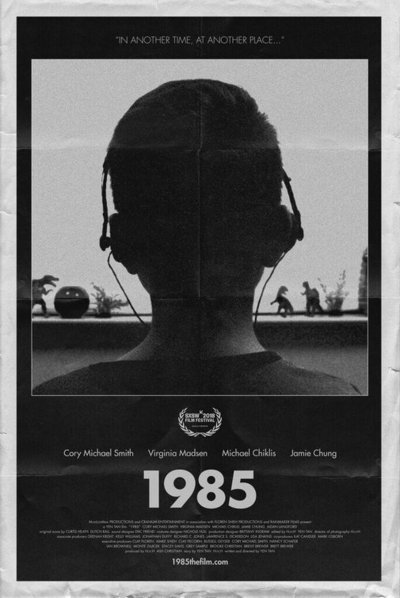 Oh God, do I know 1985 pretty well, a year where I learned a lot of life lessons, so I look at that year with mixed feelings. It was a tough, but I came out stronger from it. I look back and think that this was more than thirty years ago, and the world was different then. Director Yen Tan captures that year perfectly in ‘1985,’ one of those small movies that we used to get a lot more. It’s shot in black and white 116 mm, and the way it looks and sounds adds to its storytelling.

Adrian (Cory Michael Smith) goes home to Texas for Christmas. He has been living in New York City and has not been back in three years. He has a younger brother, Andrew, who seems wary of him. There’s a lot of ‘unspokens’ here. His parents probably know he is gay but won’t talk about it. Furthermore,  Andrew is becoming a Madonna fan, and is now interested in theater (he wants to see the movie version of ‘A chorus Line’!) so we all know where that trajectory is going. Most significantly, Adrian’s lover has just passed from AIDS, and it looks like Adrian has it, too, and this trip home may be a way for him to say goodbye to his family – he maxed his card out to buy them expensive gifts. There’s an element of internal heartbreak here, and the actors are all subtle and effective, with Smith leading the way. I was taken by Virginia Madsen who plays his mother. As a mother of a gay man, she is torn between her husband, and her love for her son, and communicates her feelings both sides effectively. The screenplay is spot-on, showing then-topical references accurately. I was very touched by this film, and easily identified with the character of Adrian, who could easily be me at that time (he’s just a little older than me)  Gay guys of a certain age now (my generation) would like this film and I hope they find it.